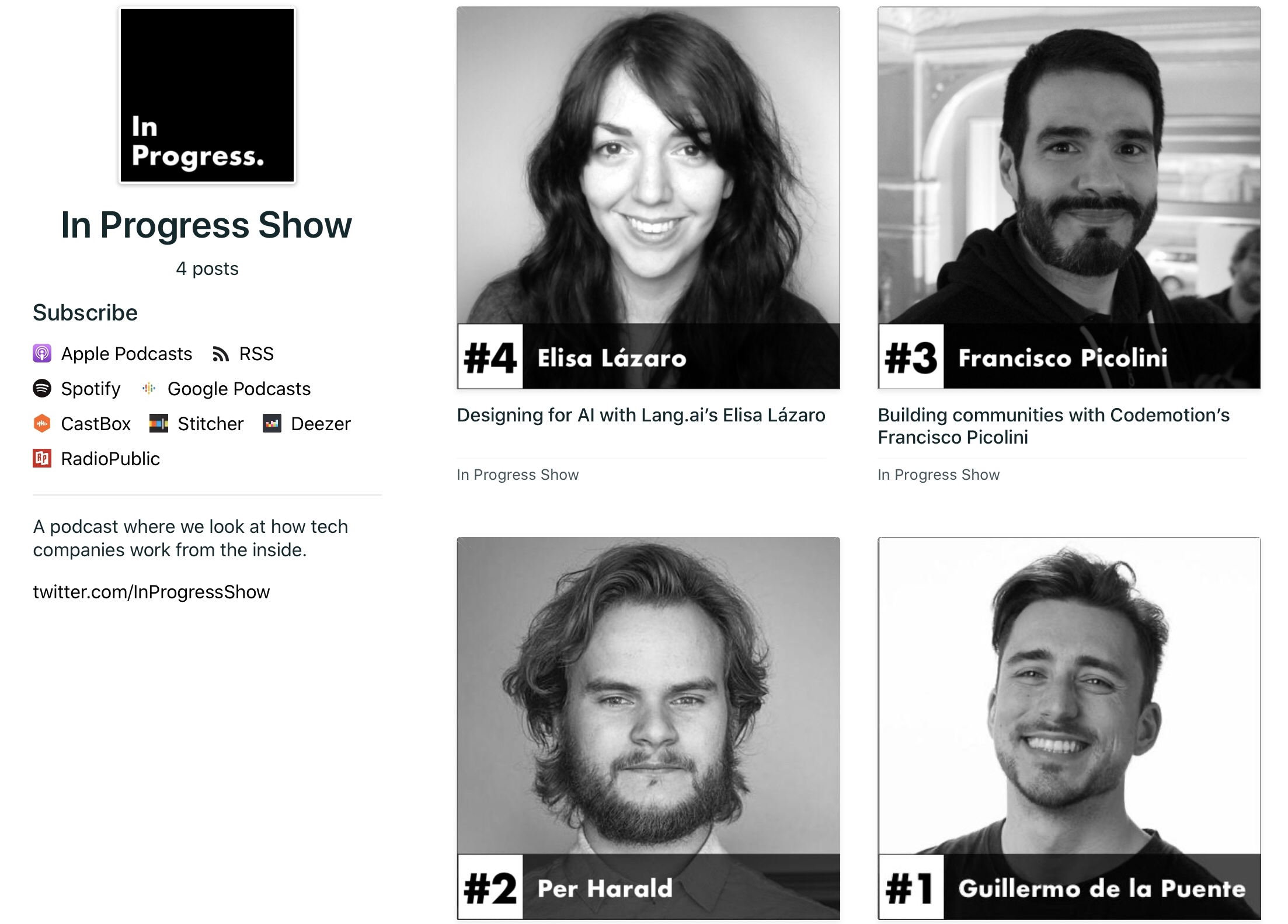 One of the main things I look for when I read articles from other professionals is to learn from their craft and how they get the job done. It’s common to read experiences or tips where everything works incredible well. There are no errors or wrong decisions and everything is already learned. This is one of the reasons why I started to think I about a way to share content that was focused on the honest bits of doing the multiple jobs that are available in the tech industry.

I ended up deciding to go with the podcast model for the content since it has the benefit of the unexpected. You never know how a conversation can go, even if an initial script is defined. It also helps me to learn a lot from others.

The platform I chose to host the podcast is Audioboom. After some research, I ended up going with this platform because of the ease of use and the distribution options. It took me more than hour to setup all the channels, as some of them require manual action.

After a few days, the podcast was already accepted and published on the following platforms:

I started using the DAW that I was using at the moment to play some ocasional music: GarageBand. It did the job, but I decided to try other tools. I downloaded the free trial of Adobe’s Audition. It had a small learning curve but in a few hours I managed to edit an episode really quick. From the other three options, it was the best, but there was a little problem: it was expensive as hell for my use case. Paying 25$/mo for a software that I will be using twice a month for less than three hours wasn’t worth it, so I moved back to GarageBand. I have to admit that once the workflow is learned, it’s pretty quick. The only thing I miss is the ability to remove the empty space (in one click) after cutting a segment.

Once I agree on a topic with the interviewee, I share a Notion page with the next steps and a brief script with a ideas to discuss and use as a starting point. I have been using Notion for three months and I am happy paying user. It’s now my default place write for the blog, organize my weekly work and goals, and even use it as my journal.

Regarding the music I use, I bought the into and outro music rights here. 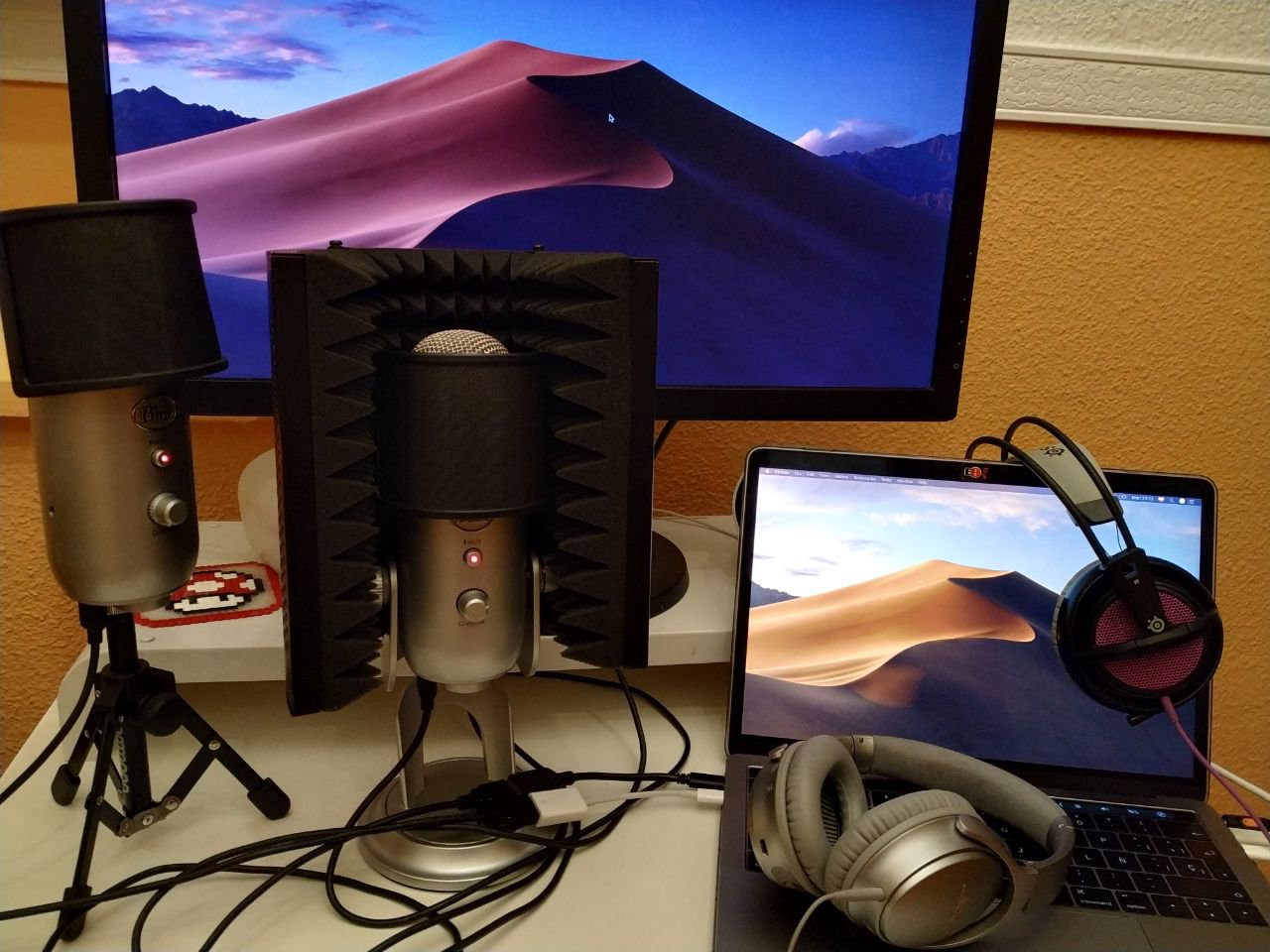 I have two Blue Yeti microphones that I use when I record an episode at my place. There is a small room filled with acoustic foam panels that drastically reduced the echo. If the interviewee doesn’t live in Madrid, the only requirement is to get the audio recorded one both sides. This makes it easier for the editing phase and always improve the audio quality. Both microphones have an anti-pop filter, and one of them have an accessory to reduce the possible echo that might remain.

The headphones I use are the ones that I already had: an old Siberia v2 and a fairly new Bose QC35 II. I use a 3.5mm jack splitter In order to have both speakers to hear what the other one is saying.

The recording happens on my laptop, using GarageBand. Given that I am using a MacBook that only has USB-C ports, I need to use an adapter to connect both microphones. If you also have an iPad, it’s to be able to control GarageBand directly with the Logic Remote app.

There is a funny story here: it took me some time to manage to correctly record both microphones at the same time. It turns out that you need to create an audio interface that include both microphones input. It seemed easy, but when I tried to do it, only one microphone was working. Later on I discovered that this was happening because both USB devices had the same identifier… which some people changed by sending their microphones to Blue for a firmware update! Thankfully Blue launched a software that allowed users to update the firmware with one click. I updated one of them and, magic!, it changed the USB identifier and everything worked like a charm. The other microphone was left with the stock firmware.

I wanted to specially thank Guillermo de la Puente and Per Harald for being my first guests. It’s a great experience where I have fun and learn at the same time.

You can check all the episodes directly from inprogressshow.com.